You are here: Home1 / Biography

Prophet Akwasi Agyemang Prempeh operates with an extraordinary prophetic mantle under the anointing of the Holy Spirit, helping to liberate people from all kinds of spiritual and socio-economic challenges.

His ministry in the prophetic and the supernatural has resulted in saving many souls through miraculous deliverance and healing. A sought-after prophet of our time, he travels extensively with the message of Jesus Christ, preaching all over the world holding prophetic conferences and deliverance services. He holds an Honorary Doctorate Degree in D.Mins from Ambassadors College of Ministry & Theological Seminary in New York, USA and now a Bishop Elect by ITHUS Council of UK. And the CEO of Springs group of companies worldwide and the president of International Association of Prophets and Deliverance Ministers, the General Overseer of Springs of Joy Ministries International Worldwide. He has also won different accolades and awards from different organizations and Governmental bodies for his impact on the Kingdom and community including the RECON COMMUNITY LEADERS AWARDS for his leadership in new community based initiatives.

The founder of the popular THUS SAYEST THE LORD TV & Radio broadcast which reaches millions homes around the world. He is married to Mrs. Rosemond Prempeh, a Psychologist and life coach. They have three beautiful daughters 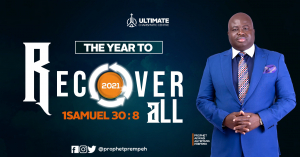 Overflowing Favor Is Yours At The Throne Of Grace!